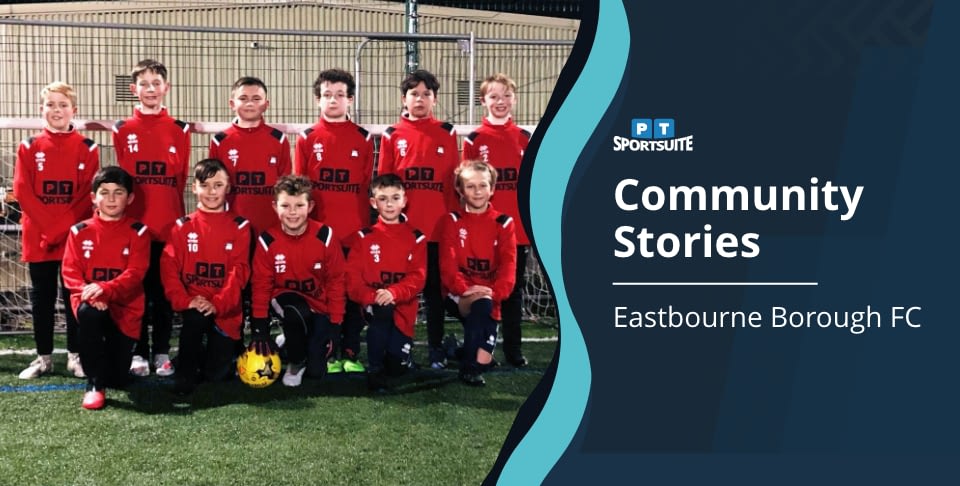 PT SportSuite asks EBFC U11, U14, U18 coach Emlyn McCann about the challenges of coaching in lockdown, why coaching kids is more fun, and what makes EBFC a community club with a difference.

Tell us a little about your football background and how you got involved in coaching?

I used to take my son to football classes and just wanted to get involved a bit more really, so I started helping out with his team’s sessions. I was originally a painter and decorator and was about to start my own business. Then about 15 years ago, I started caring for my nieces and had to give up working full time. That’s when I began to take coaching more seriously. I realised I had a real passion for it and so I started taking my coaching badges in order to progress.

What is it about coaching in the lower age groups that you find most enjoyable?

I get a real buzz off of it. These kids are like sponges, they really want to soak it up. They hang off every word you say if you know what you’re talking about and you can deliver good sessions.

You do get certain players that are only there because their parents want them to be in there, so they’ll come and kick a ball around. And then you get some quite talented players that really want to make a career and a proper go of it. They’re the kind of kids that really apply themselves.

I’m quite strict, but we have a lot of fun at the same time. I treat everybody that I coach like my little brother. Basically, they know they can relate to me quite easily.

How do you strike a balance between maximising the boys’ talents while keeping it fun and enjoyable.

It is quite difficult sometimes but I treat them all the same, especially when I’m doing a team session. But you’ll find the ones that really want to push on and make something of it will do that extra bit of work behind the scenes.

When I’m doing a team session with the U11s I generally will try to make it fun, but if they’re not buying into the session or taking it seriously, then I will become quite strict. For me they’re there to learn. So it’s finding that balance of knowing when to put an arm around them, which comes down to a bit of man-management.

But in general it’s about making the session fun with the boys putting in as much effort into it as possible. I do get phone calls pretty much all day, every day behind the scenes. “What can I do here? Can I do that?” I’m also doing extra one-to-ones with some of the elite players.

Where does EBFC sit in the Sussex football landscape?

EBFC is the third biggest club in the whole of Sussex, behind Brighton & Hove Albion, which is an elite Premier League club, and Crawley Town, who are in League Two. So EBFC represent the third highest tier of football in Sussex. They have great facilities and it is still a community run club. It’s all about the heart of the community – that’s really what sets them apart.

EBFC seems to have a close connection to the Eastbourne community. Describe the role the community plays within the club and visa versa.

They’re an open-arms club that will accept anybody. It’s not just about an elite pathway, which you see a lot. There are a lot of clubs at this level of football that are trying hard to push on up through the leagues, as that’s where the finances are.

They’re an open-arms club that will accept anybody. It’s not just about an elite pathway

EBFC is a bit different – it’s all about the community. They have set disability sessions. They even have walking football for the older generation. So it’s really part of the community and the community have a massive part to play in the running of EBFC.

It’s been really difficult for the club financially during lockdown, and the community have been a massive help, coming down to some of the parents still actually paying their monthly subscriptions just to help out financially. That’s just amazing. That’s unheard off. Things like that make a really, really big difference.

How difficult has it been to keep the momentum going with the boys in this time of lockdown with the suspension of matches and live practice sessions having been put on hold at various stages in the past year?

It has been frustrating because you miss being there, physically welcoming in the boys with the high fives, the fist bumps, having them help you set the sessions up – the social aspect of it. Everybody seeing each other and being together – I miss that so I can’t imagine how much the players themselves miss it.

I’m still running Zoom sessions twice a week with all my players which normally last about an hour, so we still have some of that social aspect. It’s not great that it’s over a computer, but I’m still keeping them active. We do a lot of ball manipulation stuff, a lot of strength and conditioning, resistant band work to keep them fit. I set them tasks through the SportMojos platform to do 5km runs and Keepie Uppie challenges to keep them engaged.

It’s really important to keep the boys active and to avoid a situation where if we come back in six months’ time, it’s not like starting all over again

I know a lot of coaches aren’t really doing a lot – no disrespect to them, you know they have jobs. Everybody’s different. But for me, it’s really important as a coach to keep the boys active and to avoid a situation where if we come back in six months’ time, it’s not like starting all over again.

How receptive have the boys been to this new way of doing things?

It can be challenging at times. You know as an adult, sometimes you’re just not in the mood to do certain things, you know. So when you’re teaching over 30 children at once over a computer, you’re obviously going to have a few that are not buying into it on that specific day.

Everybody has off days, even me, but in general they’ve been really good and try to make the most of the sessions and give me their best effort. If they don’t then the strict coach comes out [laughs].

What are your personal coaching ambitions? Stick with the kids or move up to the senior ranks?

I definitely have ambitions. I’ve been coaching for 16 years and have two level three badges. I can’t actually get my Uefa A Licence unless I’m with a professional club, which is definitely something in the forefront of my mind. The first team at EBFC is an ambition. I’m always looking to push on and climb that pathway – absolutely.

“Everybody has off days, but in general they’ve been really good and try to make the most of the sessions”

But at the same time, my real passion is with the youngsters. I get a real kick out of that – that’s when I’m in my zone. When I’m with the young lads, seeing the progress and seeing them push on. Especially when you take children on from very young. At four years old they can’t kick a ball, you know, and then at nine, 10 years old, after you’ve had them for five or six years, all of sudden they’re getting trials with professional clubs.

It’s a really good feeling to see that and obviously the parents love it, the players love it. I get a kick out of watching the smiles on their faces when they’re running around a football pitch. Even with their friends, the ones that don’t take it as seriously, enjoying that freedom of running around on the pitch.